A couple beers at Thirsty Dog Brewing Co.
(To be honest, we weren't that impressed with this place...)

Dinner & beers at Great Lakes Brewing Co.
(Now this place was awesome!  It even had a beer cellar with a bar, so cool!)

Checking out The Arcade in downtown Cleveland
(What a beautiful building!)

Cute giraffes at the zoo!

It was SO awesome!!  So glad we finally got to visit!


We were originally planning on going camping this weekend, but the weather was against us (rainy and cold all weekend long).  Instead of just sitting around the house all weekend, we made a spontaneous decision to go on a brewery road trip!  We hit up a bunch of breweries that we've been meaning to get to and had a blast (some were better than others... hint hint Great Lakes & Fat Head's)!  The weather was crazy, though: we left Pittsburgh and it was in the upper 50s and sunny.  By the time we got to Akron, it was pouring and then as soon as we drove into Cleveland, it was a complete snow blizzard.  It was insane!  We, of course, still made the best of it and didn't let it ruin our brewery hopping weekend.  So fun!  Cheers!*
Posted by Anna at 7:20 AM 0 comments

Happy Friday!*  Trying out a new series over here... "Five Things Friday".  Every Friday, I'm going to do a post rounding up five things from my week.  It might include an interesting link, something I'm currently loving (or hating), an inspiring quote, a pretty picture, the list could go on and on.  Basically, this is sort of a "catch all" type of thing... all of my randomness from the week rolled up into one post.  Enjoy! :) 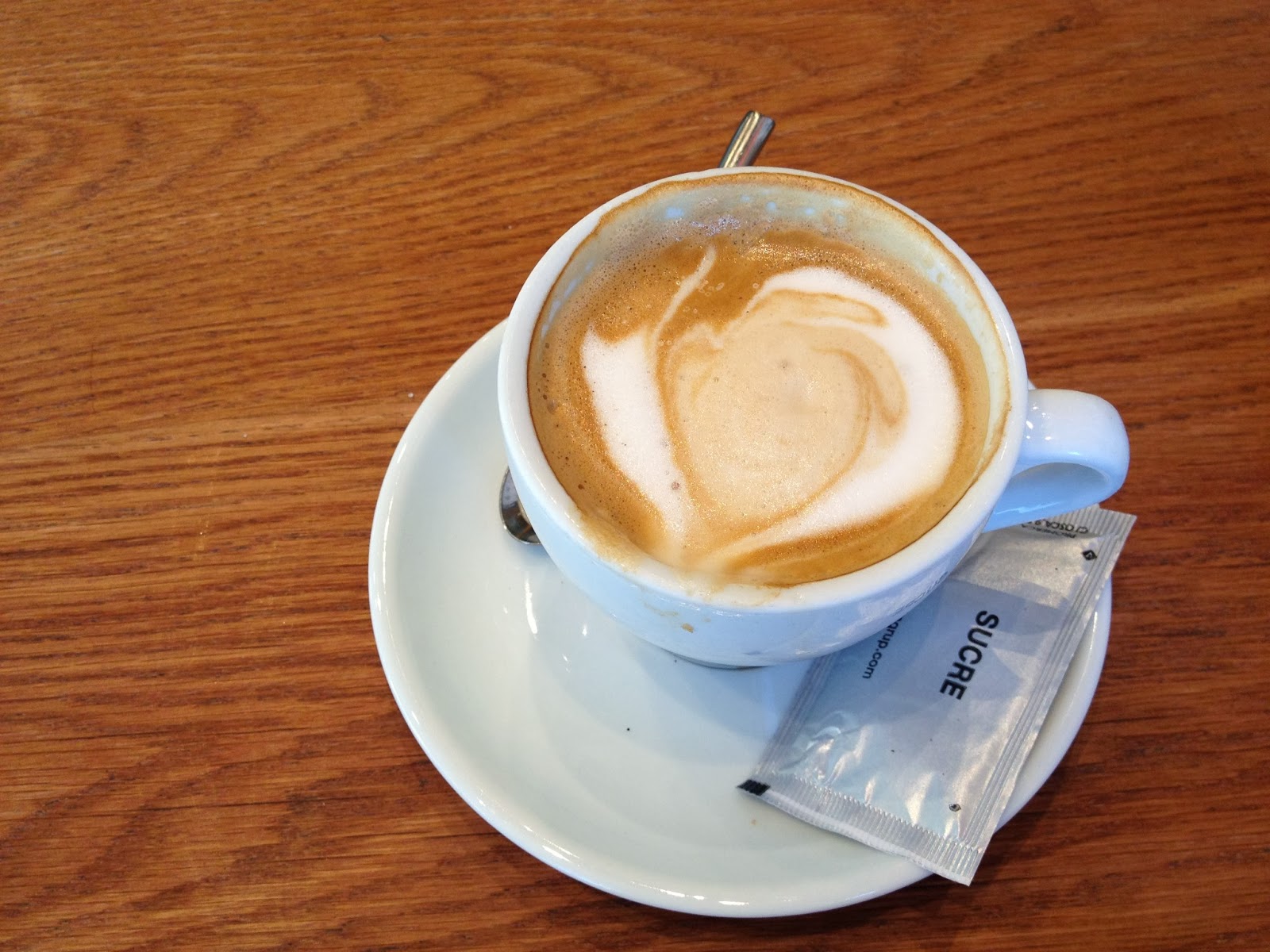 {marvelous cup of coffee from our trip to Spain in 2012}

2.  This quote...
"Life is seeing the world, even when it's close to home."
I love this.  It's a good reminder that you don't always need to go on an extravagant
vacation far away to have an amazing adventure and explore new things.
There can be great things to discover right in your own backyard.

3.  This masterpiece...
This Guy Built His Own Namaste Bubble House and It Looks Amazing!
This is so awesome.  And it only cost him $9,000 to do.  What!

4.  This book...
Blog, Inc
I got this book from the library last week and it has been really inspiring!
I went through a blogging hiatus recently due to lack of ideas and direction for it,
but this book has been motivating me to dedicate more time and love to this
little internet corner of mine.  By no means am I looking to make a profit from my blog
(maybe some day!), but there are so many great tips in this book to just making
your blog better in general.

5.  This site...
Tiny House Swoon
(especially Joe's Truck House)
These places are so inspiring.  They are a good reminder that you don't need
a lot of things to live a rewarding and wonderful life.  Simplicity is key.

Happy weekend, friends!*
Posted by Anna at 7:12 AM 0 comments

Well, it's almost April and I'm still wearing gloves and my winter coat to work.  Something is wrong with this picture.  Usually, Pittsburgh has decently mild winters.  But no, not this year.  We moved home from California riiiight when the weather gods decided that it'd be a good idea to have winter last a little a lot longer than normal.  But!  I must (for my sanity) stay positive here and think about those couple days (that have been few and far between...) where it actually did feel like spring.  During those days, we spent as much time as possible outside enjoying the warmer temperatures.  And let me tell you... they were glorious!

Let's be honest here, I really just need nicer weather solely to have a reason to go get froyo.
Bring it on, spring! :)
Posted by Anna at 12:46 PM 2 comments

And I even busted out the djembe

Beautiful weather on my run around the neighborhood

A day at the Strip District (with chocolate covered pretzels and oreos!!)

Life inspiration from a bathroom stall

We had a great weekend at home, just hanging around Pittsburgh.  It was nice to have a more relaxing and laid-back weekend since we've got some trips out of town planned for the coming months!  Now if only the weather would start to cooperate and bring us some spring temperatures.  I mean, it's almost April... come on!

Happy last week of March!*
(this year feels like it's flyyyyying...)
Posted by Anna at 1:24 PM 0 comments

Happy Friday!*  I'm really trying to get back into my blogging routine and be a better blogger.  So I feel like it'd be a good idea to do a quick "catch up" post of things we've been up during my "blogging hiatus".  This way, I can have a fresh start going forward and blog about current happenings.  So here we go...

Greensky Bluegrass concert at the Rex Theater!
(This band is SO fun!)

A trip to Erie for our nephew's 3rd birthday

Visiting Lee & Jess in Maryland and hitting up lots of great breweries!

Celebrating Valentine's Day and loving this little gift Brett got me :)

Getting outside for some hikes even though it's cold and snowy

Spending a Saturday wandering around our old neighborhood Shadyside
(and grabbing some slices and beers at Bites n Brews!)

We made homemade pretzels!
(This is one thing I actually did blog about this year)

Celebrating lots of birthdays!
(Mom, Dad, and my sister Brita)

Okay, now we're all caught up and it's back to regular blogging!
Happy weekend!*
Posted by Anna at 12:16 PM 0 comments

A gorgeous 6.5 mile run on the trail

A stop at North Country Brewing Co. for some beers
after meeting up with Brett's parents and sister for dinner in Mercer

Doing a little weekend car browsing at the Jeep dealership!

Went to a St. Patty's Day party at our friends Adam and Kristen's house
and brought this delicious cookie cake (and Brett's homebrew, of course!)

Ended the weekend at my parent's house celebrating my dad and sister's birthdays
and finally watching "Catching Fire"!

Hooray, "Scenes from the Weekend" is back!  I haven't done a post in this blog series since December when we lived in California!  I'm happy that I'm finally getting it back up and running.  We had a great weekend with pretty nice weather, so I can't complain.  I'll take all the decently nice weather we can get at this point!  This brutal east coast winter is definitely making me miss our Southern California sunshine at this point... Here's to hoping some spring weather is on the way!

Chocolate, Beer, Music... What else matters?

This past weekend, Brett and I decided to take a little road trip to Harrisburg!  Appalachian Brewing Company was putting on their annual "Winterfest" event and we decided to make the trip over for it.  We did a similar trip a few years ago for the very same reason.  And once again, we had a blast!

We hit the road Friday after work and made it to Harrisburg just in time to grab a bite to eat (and some beers, of course) before calling it a night.

On Saturday, we had lots of plans!  And these plans started with spending some time at Hershey!!  First, we spent some time at the Hershey Story museum learning all about Milton Hershey and how his famous chocolate came to be.  And THEN, we did a chocolate tasting!!  We got to try various chocolates from different regions all over the world and it was so awesome.  My love for chocolate is strong, so naturally this was one of my favorite parts of the weekend. :)  We also hit up the Chocolate World ride because what's a trip to Hershey without it. ;)

After all this chocolate, we need to take a breather before moving on to the next item on the agenda (beer!).  So we decided to head up to Hotel Hershey and walk around the grounds for a bit, since the weather was really awesome this weekend!

The sun was starting to set and we figured it was about time for some beer, so we headed over to Troegs Brewing Company (one of my faves!).  We reserved a spot on the last brewery tour of the day and it was pretty cool.  We got to go into the back of the brewery, where usually only the brewers are allowed, and learn all about Troegs and how they make their great beer.  And at the end, we got to do a beer tasting that resulted in a few free pint glasses, score!  And after the tour, of course we stuck around for a while drinking some beers and enjoying the cool vibe of the brewery.

After such a fun, jam packed day, it was time for Winterfest at Appalachian Brewing Company!  We got to drink local brews and see some great (and some not so great) bands throughout the night.  And of course, it ended with pizza. :)

On Sunday, we woke up and wandered around downtown Harrisburg for a while before hitting the road.  The sun was shining, but it was still pretty chilly.  We made the most of it though!

On our way home to Pittsburgh, we decided to make a detour visit to Johnstown (just like last time!) to take a stroll down memory lane.  We walked around UPJ's campus (where we both went & where we first met/kissed/lived/etc!), drove by our old apartment, and ate dinner at one of our favorite Johnstown restaurants (The Boulevard).

After all that fun, it was time to head home to Pittsburgh.  We definitely packed in a lot in a short 2 days.  Just goes to show that even a small weekend getaway can be so much fun!

Anna
Wife, mama, and lover of the outdoors 💕🌲